Bored & Hungry is a restaurant in Long Beach, California that opened just this past April. It’s a heavily NFT-themed restaurant that accepted cryptocurrency as payment for food. Note the past tense when I said “accepted.” Because now it’s changed its menu to reflect the fact that it now only accepts boring old fiat…

If someone opened up a burger restaurant where they'd give me a burger and when it came time to settle up I could draw them a picture of a monkey wearing a hat I might actually be into that.

They'd go bankrupt in a week, but still.
Nashville, Tennessee

What You Should Actually Eat and Drink After Giving Blood by Rachel Baron
Tuesday May 24th, 2022 at 10:11 AM

Giving blood for the first time can be a nerve-racking experience: You’re sitting and watching an entire pint of your own blood travel up a see-through tube and into a plastic bag while your seat neighbor does the exact same thing. The common post-donation snack of cookies and juice—occasionally pizza—feels like a…

Come on--everyone knows the thing to drink after a blood donation is beer.
Nashville, Tennessee

Tennessee To Throw Unhoused People In Prison For Six Years, Take Away Their Voting Rights by Robyn Pennacchia
Tuesday May 24th, 2022 at 9:17 AM 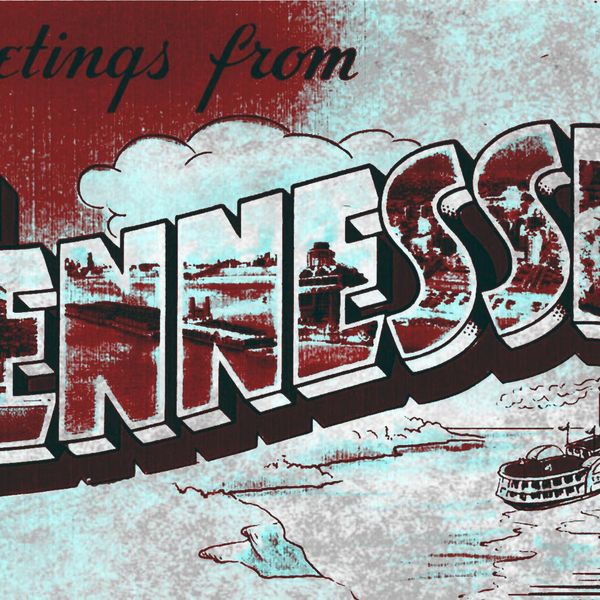 Tennessee is on the verge of becoming the very first state to make "public camping" a felony, punishable by up to six years in prison and the permanent loss of one's voting rights. This was not done in response to a slew of Boy Scout troops making s'mores and telling ghost stories in local parks. Rather, it is a gross name for people sleeping outside because they are unhoused and have nowhere else to go. Probably even Republicans are aware it would sound pretty bad to just straight up say they want to throw people in prison and take away their voting rights because they can't afford to live anywhere.

The bill's sponsor, GOP state Sen. Paul Bailey, says the law will likely not actually be enforced, noting that so far no one has been arrested for violating a previous law banning "camping" on most state-owned property.

“It’s going to be up to prosecutors ... if they want to issue a felony,” Bailey told the Associated Press. “But it’s only going to come to that if people really don’t want to move.”

Or, you know, can't? Because they have nowhere else to go?

One good way to ensure the law is not enforced and that people are not sent to prison for being unhoused is to not enact the law at all. Why are we trusting the judgment of prosecutors here? How is that a good idea?

This is perhaps the worst way on earth to solve this particular problem. If the problem is that people are unhoused and do not have jobs, why would putting a felony on their record — which would make it more difficult for them to find housing or get a job — be the solution? Unless the real goal is ensuring poor people can't vote, this does not make sense.

Like many other areas of the country in the last few years, Tennessee has seen an uptick in unhoused populations, along with housed people whining about unhoused people panhandling. Why? Because the rent is too damn high and people are getting evicted. In the last two years, since the pandemic hit, almost 35,000 people in Memphis alone have been evicted from their homes.

What is it that people think is going to happen? The living wage for one person in Tennessee is $15.45 an hour, which is quite a bit lower than it is in some other parts of the country. The minimum wage, however, is still $7.25, just as it has been since 2009, and the state has the highest number of workers making minimum wage in the country: four percent, or about 120,000 people. This is not sustainable.

This is not to single Tennessee out (except for the minimum wage thing), because the unhoused population is skyrocketing across the country, and not because people just really like camping. Evictions have gone up, rent has gone up and as much as people love whining about and blaming inflation on workers who want to get paid enough to live, people are still struggling to get by. Clearly!

Should We Evict 30 Million People At The End Of This Month? We Think 'No'!

To paraphrase a great Princess Diana sweater, these evictions were a luxury we could not afford. In fact, the way we treat and deal with the unhoused is a luxury we can't afford. I say luxury, because the reason we can't address homelessness in an effective and cost-efficient way is because Americans dislike the narrative of helping people by giving them things and would much prefer one in which those people pull themselves up by their bootstraps.

It has been proven over and over that the most effective solution is also the least expensive: giving people somewhere to live. But we can't do that, because it is an unsatisfying solution for many Americans.

People have created soothing narratives about why people are unhoused, most of which relate to them being morally deficient in some way or another.

In these scenarios, the only way to salvation/a home is for people to hit rock bottom, then pull themselves back up, through sheer grit and determination, thus providing an inspirational and heartwarming story they can hear about on the morning news, one that makes them think about how lucky they are, while assuring them the best thing anyone can do to help the poor is literally nothing. Or, at most, volunteering at a soup kitchen on one of the two days a year they need to eat, Thanksgiving and Christmas.

Throwing poor people in prison will not solve this problem, and it's only going to get worse if we keep doing nothing about it and trying to solve it by yelling at people for being poor and unhoused or throwing them in prison for it. Housing people and getting them help to get back on their feet is not just the compassionate solution, it is the only logical solution.

Do your Amazon shopping through this link, because reasons. 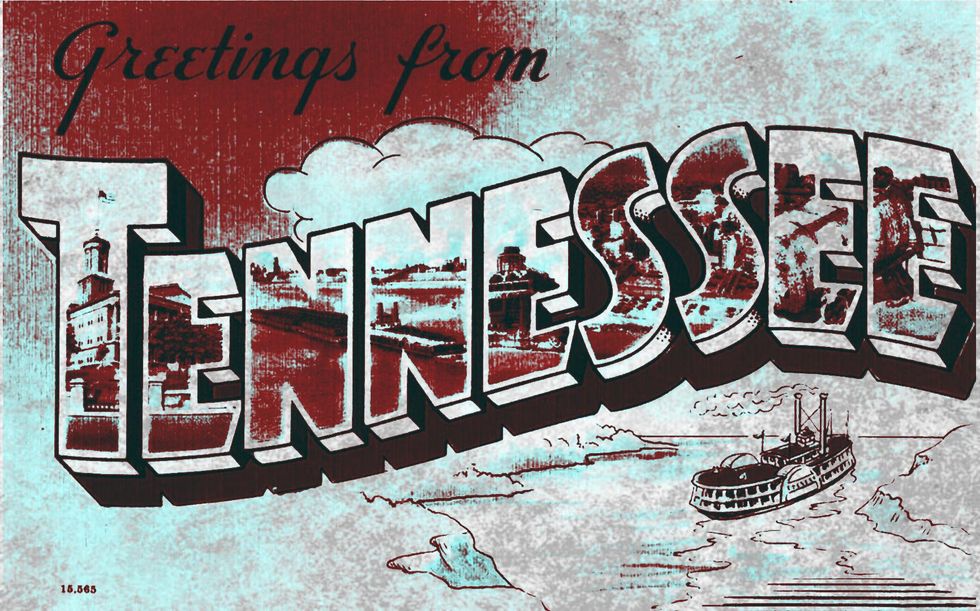 Saturday Morning Breakfast Cereal - Right In by tech@thehiveworks.com
Monday May 16th, 2022 at 2:51 PM 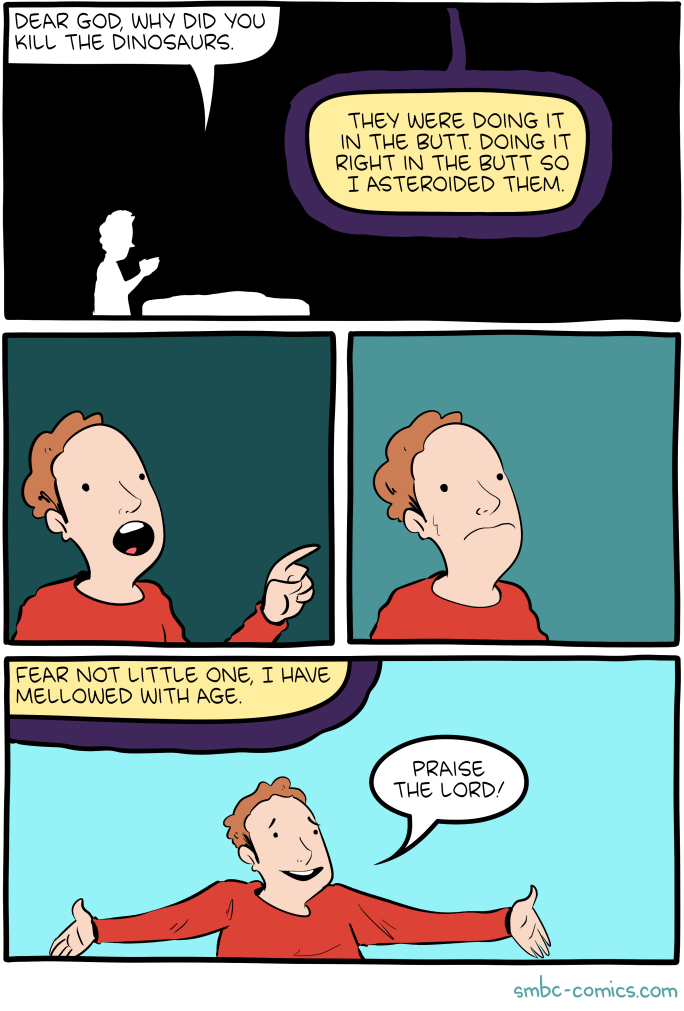 Hovertext:
May the Lord chill out by the time you die, amen.

The almighty isn't wrong with what the dinosaurs were doing, but, you know, ducks also do it in the butt, er. cloaca.
Nashville, Tennessee

kenfair
I like "asteroid" as a transitive verb. Verbing weirds language.

The McElroy Family - All

Some people believe that men in the world are getting softer and masculinity is under attack. But not to worry, there’s a solution: tanning your . . . nethers. Although the idea of exposing your soft bits to the sun may be embarrassing, there’s also, as Dr. Sydnee explains, zero evidence that it’s beneficial.

Music: “Medicines” by The Taxpayers https://taxpayers.bandcamp.com/

I'm gonna withhold my opinion until I find out where Dr. Oz comes down on the whole testical tanning thing. Is he pro-irradiating your balls? Has anyone asked him?
Nashville, Tennessee

All orange cats share a singular brain cell, it’s not his turn to use it. 😂